Gunnar Røstad is probably my idol, but I try to incorporate things I like from other makers, too. My decoration is somewhat sparse. I prefer spending my time making more fiddles.

I use geared pegs (Wittner) for easier tuning. 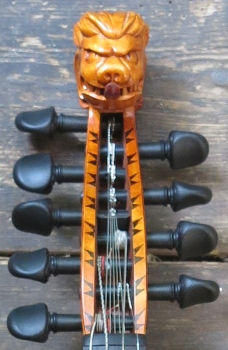 In 1988 the player Vidar Lande asked me to make a hardangerfiddle without rosing and pearl and with violin shape to the table and sound holes. And with a scroll instead of the traditional hardangerfiddle head. Otherwise, it would be as a normal hardingfiddle, regarding neck stop, string length and sympathetic strings. He suggested to call it "setesdalsfele" (setesdal fiddle, setesdal is a valley in Norway with a rich playing tradition). He felt that it would be well suited for playing in setesdal tradition, as the hardangerfiddle is relatively new there, and the playing style may have kept some violin character.
I later realized that i.e. Per Hardestam in Sweden, had made something very similar without ever linking it to Setesdal. So I have become a little doubtful about the name. Some call it "bastardfele". Which I kind of like! (But probably translates to english badly?)